Gonzo’s Quest (released in 2011) is about a Spanish explorer who tries his with luck mining gold in the Andes Mountains in Peru. By the way, he doesn’t like to be alone: he asks for your help all the time.

Maximum win: unspecified, but above 2,500x the bet

Gonzo’s Quest is the first slot where the “Avalanche” (or Cascading) Feature is put into play.

Nowadays, we see it more and more often, in particular with Megaways slots. The fact is that this feature was brilliant and innovative at the time.

Are you going to win gold with Gonzo’s Quest? It’s indeed possible!

The maximum win must be at least 2,500x the bet

The maximum win for Gonzo’s Quest is not specified by Netent. But the slot has been there for such a long time now, that I decided to look for the big wins on the internet.

The good news: I have seen plenty of wins of over 2,000x the bet. I assume that the maximum win is not much higher than around 2,500x the stake.

Please allow me to tell you more about this fantastic slot. 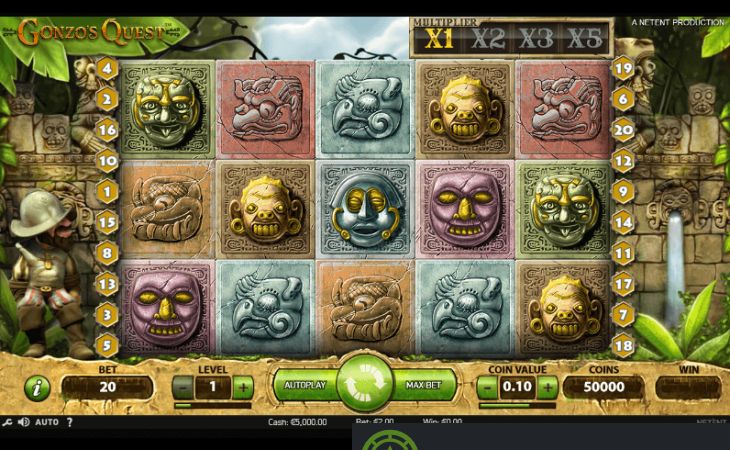 The main game has 5 reels with 3 rows of symbols. There are 20 paylines.

The symbols are some stone amulets that stick (are nailed) onto a wall.

The most important feature in the main game is the so-called Avalanche Feature (or cascading feature).

When you make a winning combination, you get a free re-spin, and the winning symbols disappear and make way for new symbols. This way, you have chances to make another winning combo. You get free re-spins as long as you keep on making winning combos.

Now the better news. If you get a re-spin, the multiplier increases by +1. That multiplier can increase up to 5x (if you have four consecutive winning combinations).

To get the free spins, you need three scatters and/or wilds om an active payline

It gets even more fun when you get the free spins (Gonzo’s Quest calls these free falls). You gain access to the Free falls, when you spin three or more bonus symbols and/or wilds on a payline.

Patience is required though: on average, you need some 180 spins in the main game, to activate the free spins.

The free spins bonus round – multipliers up to 15x

During the free spins you have the same Avalanche mechanism, only that multiplier can now increase up to x15! Yes, now it can become very, but very lucrative, my friend.

By the way, free spins can re-trigger. In theory, you can take an infinite number of free spins. How nice is that!

The RTP is 95.97%, which is actually the biggest drawback of this online slot. It’s not far off the 96% barrier, but most Netent slots have a higher RTP.

Gonzo’s Quest slot – the variance (volatility) is medium to high

According to Netent, Gonzo’s Quest is a medium to high variance slot.

Let me translate in simple words my friend: you have to be very satisfied if you land a win of say 500x to 1,000x your bet.

A prize above 1,000x your bet? It happens, but the odds are tiny. In very exceptional cases, you can land a win of 2,000x your stake. Maybe if you spin several hundreds of thousands of times?

In terms of volatility, Gonzo’s Quest is similar to Netent’s popular slots, such as Twin Spin, Conan, Wild Turkey or Secret of Stones.

Gonzo’s Quest slot – who will like the slot? And who won’t? 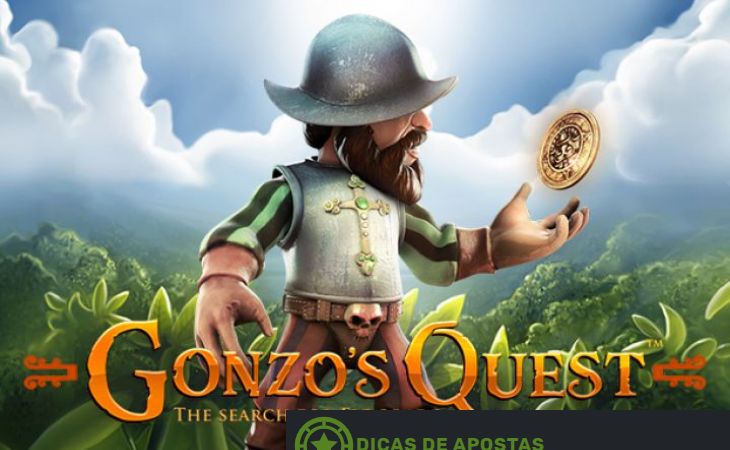 This slot, which is a classic: fun and excitement.

If you like to play a slot that’s not too complicated, but one that’s not too simple either (like a 3 reel fruit slot with 10 winning lines), then this one is for you.

If you like risk (but don’t want to overdo it) and want to go for the pretty big prizes, Gonzo’s Quest is also interesting for you. The odds for winning top prizes above 2,500x the bet are incredibly marginal, though. 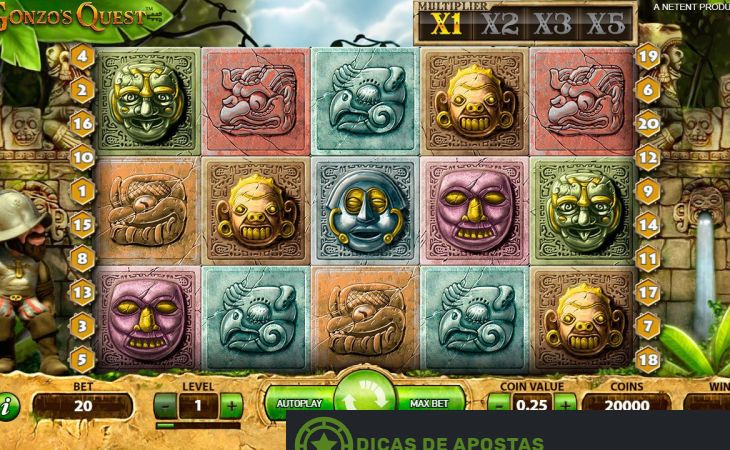 Casino game and software provider Red Tiger has revamped one of the industry’s most popular slots titles with the launch of Gonzo’s Quest MegaWays.

The game, which is among NetEnt’s best ever performers, was the first video slot to use cascading symbols in place of a conventional reel.

In a highly anticipated move, Red Tiger has now added a further layer of excitement with the celebrated MegaWays functionality, licensed by Big Time Gaming, which varies the ways to win on every spin.

The action-packed title invites players to join a charming Spanish explorer’s quest for El Dorado, where intrepid adventurers could discover wins of up to 20,000x.

Discussing the launch, Carl Ejlertsson, director of business development at Red Tiger, said: “Gonzo’s Quest has consistently proven itself as one of the best slot games on the market, so we are delighted to give it a further boost with the renowned MegaWays mechanic.

“The team has worked tirelessly alongside our partners at NetEnt to deliver this summer’s most anticipated slot. We are thrilled to see the collective effort rewarded with a fantastic new release.”

Gonzo’s Quest Slot Review. NetEnt has been established since 1996 and been in the casino industry for many years now. With now over 300 slots available to play and even more to be confirmed in 2020. Thanks to their huge success, the studio is one of the most successful in the casino industry. This success is thanks to their popular slot selection on offer, including old classics and new popular releases. I recently created a Top 5 NetEnt Slot Releases article, talking about the studios most successful releases and going down memory lane for some top spots. One game I did miss off this top 5 list is ‘Gonzo’s Quest’, due to the fact this game is high variance compared to the others included on this list. With so games to choose from it can be overwhelming. Read on to learn all Gonzo’s Quest, first released 11th November 2013.

This games visuals & theme is based on the Spanish conquistador Gonzalo Pizarro y Alonso, well known for the search of El Dorado in the 15th century. The slot background is based deep in the jungle, with stone carved either side of the reel set. There is a lot of detail within the various carvings seen, which are different images. NetEnt did a fantastic job creating this game back in 2013. Even today they are not outdated yet.

There are 9 symbols in total, this includes 3 low paying symbols. These are represented by blue, red and brown carved stones. There are also 4 premium symbols, these are represented by purple, gold, green and yellow more detailed carved stones. In addition to these regular symbols is a golden scatter and wild symbol. The highest paying symbol is the blue premium symbol, this pays 125x for 5 across a pay line. Wild substitutes for all symbols.

Central to Gonzo’s Quest is the ‘Free Falls‘, triggered by landing 3 or more scatter symbols during one spin. This will award 10 Free Falls, avalanche multipliers are active during these spins. These multipliers are x3 (starting), x6, x9 and x15 in order for each avalanche during one spin. An additional 1o free falls are awarded if 3 scatters land during a free fall.

Overall, I love playing Gonzo’s Quest in my spare time and have done for years now. The game is one of the most played in the casino industry even years later, thanks to the casino community. Be sure to try the game out for yourself if you haven’t already. Also, be sure to check out our exclusive casino offers.

Volume 5 of ‘Spanish Sentences’ contains a series of articles and accompanying sentences...